Do you want to work with your significant other? What about commuting together to the same job? Better yet, do you want to go to work with them and then return home together to work on more projects? The latter is exactly what Ron and I used to do. These days we have separate day jobs, but there was about 10 years where we worked together at home and away from home. However, we still are the Pentavis company. Maybe you and your S.O. can work together too. You might just need some pointers.

Every couple is different. We all know this. However, there are some essential skills to cultivate a relationship’s longevity. Among the list are:

Ron and I met during the time Pentavis: Gamer’s Volume was about to be released at the San Diego ComicCon. The team was struggling against deadline when Ron came aboard. He had an immediate passion for the Pentavis products, which, at the time was only a role-playing game. We “fondly” remember staying up, what felt like, 24/7 for the next two weeks. The team was able to make the deadline and I like to think Ron had a large role.

Also at the time, Pentavis performed multimedia design services. Ron, like most of my independent contractors, had a bachelor’s degree in media arts. He was a welcome addition to the team. We worked side-by-side with many clients. However, that was all about to change!

Have you ever met someone and things went in a different direction than planned? Yeh, me too. Ron and I worked closely during the day and in the evenings we were gaming or working on more Pentavis projects. We got along as if we had known each other for years. The following year we became a couple and continued to be our creative selves.

Ron had also fallen in love with the Force RPG (Pentavis at the time). Comic books were a big part of his past and he wanted to merge that format with our role-playing game. While we were working on Pentavis: Forlyth’s Volume, a companion book to the core rule-book, Ron asked if he could begin writing comic books based on the role-playing game.

Basing comic book stories in Pentavis was no issue. Of course he could. My concern was time and skill. Did we have enough time to devote to products outside the role-playing products?  Did we have the skill set to produce a comic book? The answer were … none of that mattered. What Ron wanted to accomplish was what mattered. Understanding what your significant other needs/wants to do is key here. I recognized that comic books were important to him and this was a vehicle for him to create his own.

Along with understanding, came patience. Learning new skills and designing workflows to accommodate a new endeavor takes patience. It takes even more when you have to redo all the work or learn even more skills if the first plan doesn’t go as expected.

Birth of a Product Line – Compromise and Courtesy

A person can’t have their way all the time. Even though we, and other volunteers, were working on projects based on things I had created many years in the past, I tried not to make it my way. Each member of a team, even when there are only two of you, deserves courtesy. Every voice is equally important – no matter whose idea it was. As a team, the activity belongs to everyone. As half of a couple, my mission became achieving my goals and Ron’s goals. As the other half of the couple, Ron had the same mission. We were lucky that our goals in life were in sync and complimentary.

Once we had our team (usually just the two of us) with a set mission, we began work. But, on whose projects first? Pentavis had many resources for supplement books for the role-playing game. We could have worked on those for years to come. Ron had started writing scripts for comic books. Both product lines were equally important! With an unspoken compromise, we naturally began alternating projects. In 2005 we published the first RPG book. In 2007 we released the second. Shortly thereafter we had finished the first comic book.

Out of these two skills, Please and Thank You made the most difference. Our relationship was still young, but we had managed to complete two more projects and had birthed a product line.

Look for Change – Listening and Respect

I look at change, not because I am flawed, but because I want to grow. Constructive criticism is part of that. It is external and hard to hear sometimes. Taking this from your S.O. can be a challenge. The key to understanding this is to realize – “We expect others to understand what we meant to say, but we judge others based solely on our interpretation of their words.” – Karl J. Newman. In other words, it is important to understand the intent behind the words of the speaker and not by what we think we heard and how we felt. Really listen!

Initially, the comic books were going to be used as marketing pieces to attract people to the role-playing game. We planned to make them small because we weren’t sure we could even do one. After we completed one, it was time to review the process and the upcoming issues. We were confident that we could make more by keeping them small. I respected Ron’s vision of them and it was my obligation to provide honest feedback. I had noticed there wasn’t a cohesive storyline between them. Ron listened to my feedback, reviewed it and agreed. So we set out to weave a story between the four books he had scripted.

Once we got the workflow down, we decided to tackle even larger comic books in addition to learning new design skills. We ate crow a few times, but we remain true to our two goals … have fun and do our best work at the time for you. 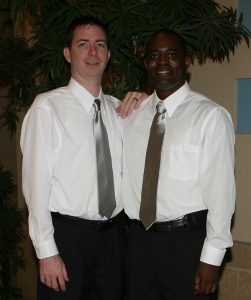 While the role-playing game holds an important place in our hearts and minds, we have much more fun with the characters we write stories for, create VR sets to experience their life-sized environments, and ultimately share it all with you. Ron and I have built a life together based on the behaviors we talked about. While they won’t solve all your problems nor prevent new ones, they are a good rule of thumb. I hope the work you set out to do with your significant other is as rewarding as ours is to us. Please share your stories with us. We’d like to know if any of this works for you and there are others out there that enjoy living and working together.

Please support our endeavors by following our company on social media, signing up and forwarding our communications to your friends and visiting our store. 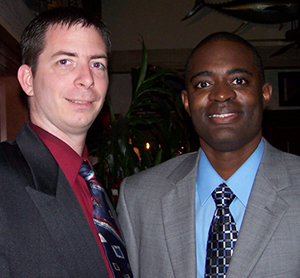